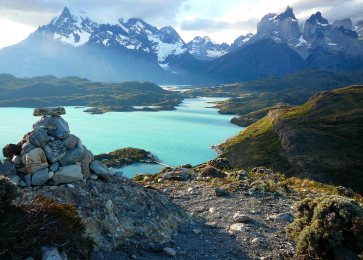 I said perhaps Patagonia, and pictured
a peninsula, wide enough
for a couple of ladderback chairs
to wobble on at high tide. I thought

of us in breathless cold, facing
a horizon round as a coin, looped
in a cat’s cradle strung by gulls
from sea to sun. I planned to wait

till the waves had bored themselves
to sleep, till the last clinging barnacles,
growing worried in the hush, had
paddled off in tiny coracles, till

those restless birds, your actor’s hands,
had dropped slack into your lap,
until you’d turned, at last, to me.
When I spoke of Patagonia, I meant

skies all empty aching blue. I meant
years. I meant all of them with you.

In poetry every mark on the page matters, including the ones that aren’t there. There’s a lot of stuff missing from this poem and it’s all the better for it. To start with, there are no speech marks around the only bit of reported speech in this poem – ‘perhaps Patagonia’. Italics generally do the job of inverted commas in poetry. A poem is a visual as well as an aural artefact, and this is a less cluttered way of signifying the spoken word.

Nor is there any information about who is speaking (beyond ‘I’) or to whom – it’s unnecessary, because we guess from the last line that it’s a lover. If the poet made that clear earlier, the last line wouldn’t have such a punch. Also absent is any explanation of where and in what circumstances this conversation takes place. That doesn’t matter because the poem isn’t about the conversation. The conversation is only what Richard Hugo calls ‘the initiating subject’, the incident or object that gives the poet a starting point. It was important enough to get Clanchy thinking, but she uses it to stand for something in the poem. That’s key to many successful poems – an object, a moment, a throwaway phrase which represents something larger than itself.

From that phrase, the poet pans out straight away into a broad vision of a possible future in Patagonia. The physical description is all about that imagined place, and it’s imagined with all the precision of a longed-for future. They’re not just chairs but ladderback chairs, and they wobble. It’s not just a narrow peninsula but a spit wide enough for two. It’s a fresh, wide outdoor scene: the horizon is only round as a coin when you can see all of it, and we have gulls, waves, barnacles, a tide, sun and sea. The cold is ‘breathless’, taking it right into the body. At the end of the reverie, returning to the person s/he’s speaking to, the narrator stays in that tidal register of language – the lover’s hands are like birds, they drop ‘slack’ like the sluggish water between tides. (Incidentally if you don’t see rhyme in this poem, look again at the sounds which echo in each stanza: I/ wide/ high/ tide, then us/ strung/ gulls/ sun, then barnacles/ coracles, then actor/ slack/ lap/ last and finally, strongest chime of all in blue/ you).

I used to read this poem as a straightforward declaration of love – ‘I meant years. I meant all of them with you.’ Aaah, how romantic. But now I read the gaps as well as the words, and I hear what else is missing – the lover’s response. The poet and broadcaster Ian McMillan likes to ask poets which word is at the centre of a particular poem, and I think in this case it might be the word ‘perhaps’. The skies are not a dizzying or bright blue but an ’empty, aching blue’. Almost every line break creates a tiny moment of anxiety – ‘I pictured….’ what? ‘I thought…’ what? ‘Till….’ till what? The waves are bored, the barnacles are clinging and worried. So, I think, is the narrator – every stanza break is tense, emphasising ‘I thought’ or ‘I planned’ or ‘I meant’. It sounds like a sad reappraisal, and the three-times reiterated ‘I meant’ like a defensive explanation after the event. Every word counts; every word signifies mood. The poet could make the lover’s hands quick as fish, or light as sea birds; but no, they are ‘actor’s hands’ – and they drop slack into his lap. He turns ‘at last’ to the speaker, as if he hasn’t wanted to. And what will he say?

At least, that’s how I read it. But maybe I’m reading what isn’t there.

[From Kate Clanchy’s 1996 Forward Prize-winning collection Slattern. Find out more about Clanchy and her work here.]

10 thoughts on “NaPoReMo #2 Mind the gap: reading what isn’t there”